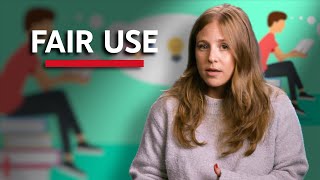 We answer what fair use is, how it's determined by law, and things to keep in mind for Fair Use relating to YouTube.